John Lewis and shiny stuff would lead most of us to believe that this is the most wonderful time of the year. Christmas can be pretty wonderful: friends you haven’t seen in years, time with family, spreading joy, giving and receiving, great food, the list goes on. This year my attitude, normally on a par with Buddy the Elf, is a bit more like the weather: lukewarm.

This year Christmas feels like it is building up to be Wrestlemania. All the previously small bouts that have taken place lover the last four months will now culminate in this one off spectacular event.

There is no tapping out.

A chair may be employed as a last minute act of desperation.

My plan to hide in the gym was thwarted. I may no longer have any idea what day of the week it is, but most of the normal working world have been counting the sleeps until they could go out, get battered, safe in the knowledge there was no getting up at 7 am the next morning.

This is my life.

Maybe that’s why my cheer isn’t as cheery. The biggest factor in my love of Christmas was desperate relief. The winter term was the longest one at school. After seven weeks of crowd control, marking, observations and prising kids off windows and walls, I wanted to sleep for two weeks. It’s like the Eddie Murphy joke about the cracker you get offered after weeks in the desert.

Christmas was the best cracker I had ever eaten.

Every day is like Christmas now. In the sense I get to stay at home watching bad television, balancing my finances and drinking anything mulled. All I’ve been missing over the last four months was a festive hat at a jaunty angle.

The traditional Christmas dinner is also a festive selling point.

Roast potatoes, Turkey, Christmas pudding, even sprouts, there’s something about that Christmas spread. It warms the heart.

As I sit staring at the swede that will be the crowning joy in vegan Christmas, I find it hard to get excited.

My brother is an excellent cook. It will be a Vegetarian/Vegan delight. But it’s not quite Christmas this year.

I nearly went full Scrooge when Facebook asked if I wanted to see what 2015 looked like. But what doesn’t kill you makes you stronger.

The Ghosts of Facebook Statuses past have helped me to gain some perspective this Christmas Eve.

This hasn’t been my worst Christmas. Not by a long shot.

There was the Christmas Air France lost all my luggage. The Christmas I lost my phone in a taxi on the way to the airport. The Christmas I nearly lost my hand and had to have surgery. Last Christmas, when  I was sent blow by blow details of how my then boyfriend liked to get down in the bedroom, and then had to spend the day comforting him.

This has been quite an uneventful festive season in retrospect.

Christmas has it’s good points. I get to make it magical for my nephew.  I stay up watching cheesy movies and playing board games with my siblings. It’s the only time of the year when I can hit reset with my parents and start afresh. I also get to see friends I love and laugh. Drunkenly.

It’s the most wonderful time of the year. If I let it be.

So I’m going to get me some wine and listen to Jingle Bell Rock until the spirit of Christmas, or Christmas spirits restore me to my normally hyperactive Christmas state.
Happy holidays. Get merry. ’tis the season. 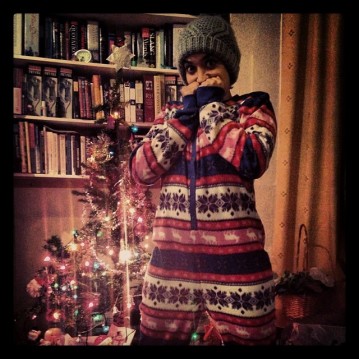 This may be the best photobomb. I still have no idea who this is. I miss you Mexico. Two years is too long. Pronto vuelvo ♥️
Remember summer? This is a British summer. So far beating a German summer by a country mile. I will be home in August. I will be at a festival. But I will not be off my tits drunk as I normally am because I have grown. I’ll just be stoned. I made the lady put the sticker on my boob #harrassment #summer #boobsout
Getting vaxxed tomorrow. Then it’ll be back to touching dirty Woodys everywhere. I hope they put extra wifi in my vaccine... #goodtimes #vaccineup #freewifihere
Throwback to me doing my best impersonation of Munch’s Scream while fangirling all over Wilde’s bust. This was taken moments before I near started a riot in a McDonald’s when I ordered a filet-o-fish. Good times *Edit* so it’s Oscar Wilde. That explains the flagrance. Forgetting London.. it’ll be good to be back ♥️ #MickyDs #OscarWilde #London #bollywoodstyle #TBT
I love the way my sister speaks. In voice and sign. I love the way the love pours out 🙂 I need to be more aware myself. #inclusionmatters
I wanted to celebrate my wonderful idiot of a sister @sannygeekysanny. That video with the mug is going up next😂♥️🤟🏾#sistersister