When you’re in times of trouble, document your rage online.

The customer service call was just going round and round in circles. He kept telling me there was nothing he could do. My claim had been rejected. I calmly repeated that by law I was entitled to that refund. The airline had lied.

I’d had a flight cancellation the month before. There’s actually been a surge in cancellations and airlines going bust. Subsequently, consumer rights were being published everywhere.

When my flight from Amsterdam was cancelled at a minutes notice the first thing I’d received was a text from a mate with my rights. The airline gave me a poxy food voucher and the assurance that my hotel and transport would be refunded. My rights would be observed.

As I heard Daniel sigh and repeat once again that there was nothing he could do, I regretted staying so calm. While everyone else grumbled, I remained positive. One jackass in particular, demanded compensation there and then. He practically wanted to be piggy-backed to a hotel and then back to his rescheduled flight.

Clearly that angry little man could see into the future.

When an airline tries to stiff you on a refund and claim they were offering vouchers when they were not #iknowmyrights#vueling PT1 pic.twitter.com/zEdgm4n4rv

A month on my claim had been rejected on the grounds I hadn’t tried hard enough to get help. Unless you’re yelling at someone you’re not trying. I wish I had been as forthright in person as I had been on WhatsApp.

Ryanair no longer corners the market on shitty airlines 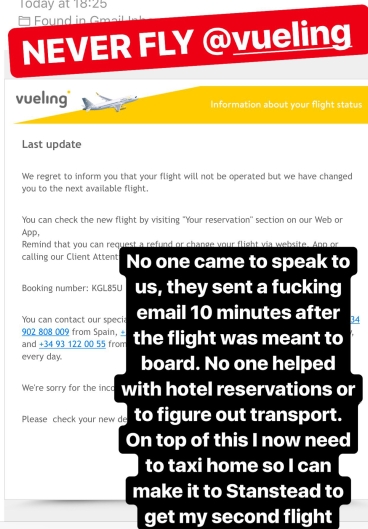 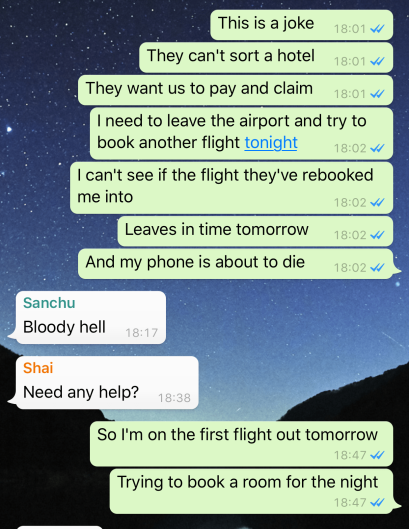 Why is it when you don’t cause trouble people take that as a sign that you’re a pushover? I can be angry. Anyone who knows me knows I got sass coming out…well, my mouth. I just pick my fights.

This was fighting talk.

Providing evidence of something that didn’t happen is like getting home with a new CD and opening it up to find nothing in the case. Vueling was saying I’d already gotten the CD.

This made me want to kerb stomp someone. But before my rage got the better of me, I did what I always do when angry: I took to social media. And that’s when I realised where my evidence was.

I may not have yelled at them to their faces, but I yelled into the void that is the internet. It saved my experience in slideshow mode to be enjoyed as Memories at a later date.

People are always telling me to get off my phone. Well guess what. I’m glad I’m on it. Because: #evidence#iknowmyrights@vueling PT2 pic.twitter.com/ggBGTVuBZm

Never before had calling someone fucking useless been so useful. I got to send them every abusive message I’d written on the topic. I even sent them a video. It wasn’t nice.

I just got an email saying they would refund me the total amount.

The next time someone moans about you doing a Facebook you tell them you’re doing the online lord’s work.

Follow me on Instagram to make sure you don’t miss a rant that could potentially be state’s evidence: @BeigeGurl